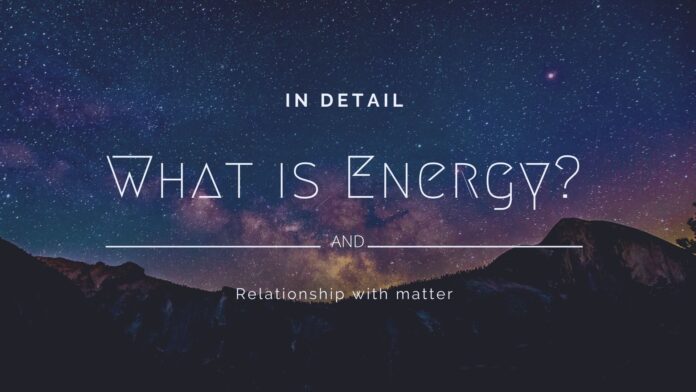 What is Energy? In Detail | Energy is the capacity to do work. Without energy we can do nothing; We can’t even move. We are able to perform various actions in our daily life just because we have energy. Today in this article we will go deep into the concept of energy and its relation with matter So Lets Begin!

Energy is the capacity to do work.

Mainly there are 2 types of energy; Kinetic Energy and Potential energy, but there are some other forms as well which include: Thermal Energy, Electrical Energy and Nuclear Energy.

Kinetic Energy is the energy of a body due to its motion. For example: when you are running, You are at motion and you are using kinetic energy to continue your motion. In the next paragraph, You will got to know about how energy is changed from one form to another.

Now lets discuss some other types of energy.

Now we are going to discuss a complex thing; Energy relationship with matter. I will try my best to explain it in simple words.

Matters relationship with Energy is described by the famous scientist Albert Einstein. He discovered the famous Theory of Relativity which states that matter can be changed into energy if it starts to move at the speed of Light which is 300,000 km/sec. It was indeed a revolution in the branch of Physics. Although it is a very lengthy topic, I tried my best to summarize it and explain it in simple words.

In this article we learned about Energy. We discussed types of Energy and the Law of Conservation of Energy. Furthermore, We learned about the relationship between matter and energy. That was it for today. Thanks for visiting our website.

Is There Any Chance of Life on Jupiter’s Moon?

What is Force? Complete Details of Force.