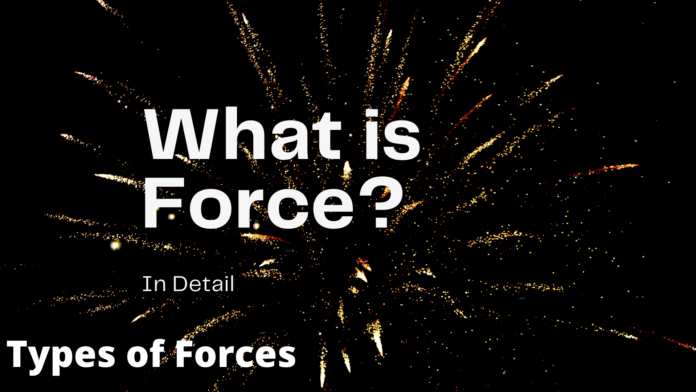 What is Force? Complete Details of Force | Well! What is force? This question may came into your mind that is why you are reading this article. From the very beginning we all have heard that a force is a push or a pull but that is not a satisfactory answer. Today, We will go into the details of this question and I will try my best to clear your every doubt regarding this question so, here we go!

First of all lets identify the definition which we all are hearing from our childhood.

A force is a push or a pull.

Lets go in the details of this definition. After hearing this definition you will imagine an object being pushed or pulled but what if the object is stationary? Does this mean there are no forces acting on it. The right answer is there are forces acting on it but the net force or the resultant force is zero. Resultant force is the combined effect of all the forces acting on an object. For example you are playing tug of war with your friend. Lets analyze it. Now at this situation force is being applied on both sides but the rope will move in the direction of resultant force or towards the direction from where more force is being applied. Lets say that you are more powerful than your friend so the rope will come towards you. The resultant will be towards yourself. Although the forces are being applied on both sides the resultant force is towards you. Now lets solve it numerically. For example you are standing on left side and your friend is on the right, your are applying a force of 500N and your friend is applying a force of 400N.

Now as you can see the force by which you are pulling rope is 100N, The remaining 400N is cancelled with your friends force hence the resultant force is 100N. Now I am sure that you have understand what is force so now lets move forward.

In order to produce contact forces Objects must be in contact. For example Friction is a force which requires interaction between two objects. Friction and Air resistance are an example of contact forces.

Non-Contact Forces are the forces which do not require the object to be in contact. Gravity is a good example of non-contact force which attracts every object to itself without being in contact.

There are some common forces which I will list in this article. These are the forces which we experience in our daily life.

Gravity is the force which pulls objects towards itself. Every planet has different magnitude of gravity. This depends on the size of the object. The heavier objects always have more gravity and so attract things towards itself. An object experiences gravitational force in the atmosphere of any planet. For example when a skydiver jumps from an airplane, He experiences gravity due to which he is pulled towards the earths ground. Now the value of gravity on earth by which it attracts object is 9.807 m/s². As we move further, This force is decreased until we exit the atmosphere.

Just imagine you are driving your car at 120 km/h at highway and suddenly an object comes infront of you, If there is no friction, you would be unable to stop car. Yes! We are able to stop objects that is all thanks to friction by which a moving object comes at rest.

In this article we learned about forces, their types and we went through some common forces which we experience in our daily life. That was it for today. Please share this article if you like it. Thank You!

Is There Any Chance of Life on Jupiter’s Moon?

What is Energy? and its Relation with matter